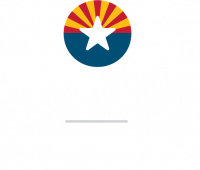 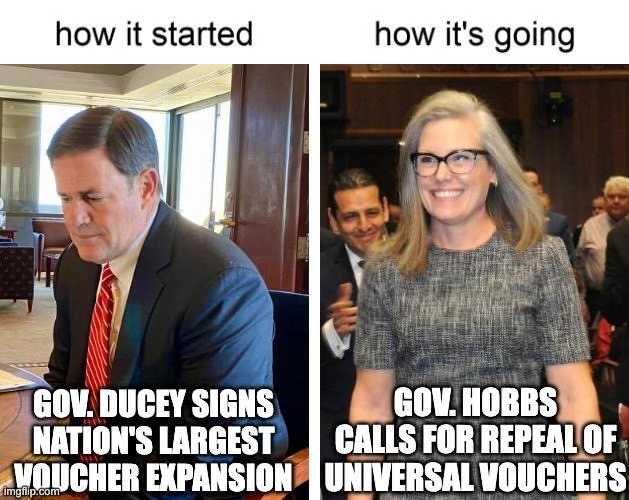 In her State of the State address on Monday, Gov. Katie Hobbs outlined an incredible list of priorities for public education. On Friday, she released a budget proposal that reimagines what Arizona’s K-12 schools can and should be. Hobbs’ bold budget calls not just for increased investment in public schools, but also for a full repeal of the universal ESA voucher fiasco which is threatening to bankrupt our state. Public education is her stated top issue, and justifiably — it’s well past time for Arizona to focus on these issues.

Hobbs’ proposal, which is the historical starting point for state budget negotiations between the governor’s office and state lawmakers, garnered a chilly reception from Republicans, as did her State of the State address.

That only underscores the fact that, in this age of hyper-partisanship, those Republicans are going to have to find agreement with the Democratic governor on state funding.

All signs point to an extremely long, divisive and protracted legislative session. But we’ve got a goalie on the 9th floor, and we are impressed by Hobbs’ courageous pro-public education leadership thus far.

In a blatant attempt to cut off budget leverage for Hobbs, majority leadership has already announced their own diametrically opposed plan: a continuation budget, in effect a status-quo copy and paste of last year’s plan with only small inflationary adjustments. As you’ll recall, last year so many Republican members wanted spending cuts that the legislature couldn’t reach agreement on a partisan budget, which necessitated a deal with Democrats. In 2023, when the Republican caucus skews even further right and Hobbs holds veto power, a continuation budget plan is likely a pipe dream.

This week, new Supt. Tom Horne also gave his State of Education address to the Senate Education Committee. That speech left us deeply disappointed. While Horne acknowledged the need to lift Arizona’s antiquated school spending cap (which majority lawmakers have taken pains to say they support waiving but “won’t be rushed” into), he also called the state of Arizona’s schools “grim.” He instead highlighted his intent to double down on high-stakes testing and forcible takeovers of struggling schools. Absent was any mention of students’ mental health needs. Asked by press to comment, SOSAZ Executive Director Beth Lewis said, “His plans are authoritarian and discipline focused, punitive in nature, and are not what kids need to help them thrive.” We will continue to watch Supt. Horne and his administration closely.

Use Request to Speak on these bills before Wednesday at 8 AM:

Want a refresher? Our friends at Civic Engagement Beyond Voting are hosting RTS trainings every Monday at 6:30 PM through March 6.

Your voice matters. A simple phone call or email to your lawmaker asking them to prioritize funding for schools and responsible policies for education goes a long way. Find your legislative district here. Email and phone information for your representatives is here and your senator is here. Make your voice heard!

1/16 Engaging with Lawmakers and the RTS System

1/23 Writing Letters to the Editor

Bills in Request to Speak 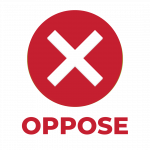 SB1001, sponsored by John Kavanagh (R-3), would ban teachers from using a student’s chosen pronouns without written parental permission. Trans youth are twice as likely to consider suicide as their peers; affirming care, which may include using a person’s chosen pronouns, lowers suicide risk. The bill continues the recent Republican theme of pushing manufactured, divisive culture-war issues for political profit. Education advocates say the bill further politicizes teachers, which will deepen Arizona’s ongoing teacher retention crisis. We expect Gov. Hobbs to veto this if it makes it to her desk. Scheduled for Senate Education Committee, Wednesday. Use RTS to OPPOSE.

SB1040, sponsored by John Kavanagh (R-3), would force transgender students to use single-use or employee restrooms instead of group bathrooms or locker rooms and would also require those options be available to kids. We oppose this for all the same reasons as SB1001, with the additional note that having students use employee bathrooms could also require giving students keys to teacher lounges, potentially leading to safety issues. Kavanagh introduced the same bill last year, and also introduced the nation’s first bathroom bill. As with other divisive, manufactured culture-war bills, we expect Gov. Hobbs to veto this if it makes it to her desk. Scheduled for Senate Education Committee, Wednesday. Use RTS to OPPOSE.

Get your #PublicSchoolProud shirt HERE. We ask for a $25 donation per shirt to cover costs and shipping. Wear Public School Proud gear to show your dedication to well-funded public education in Arizona! 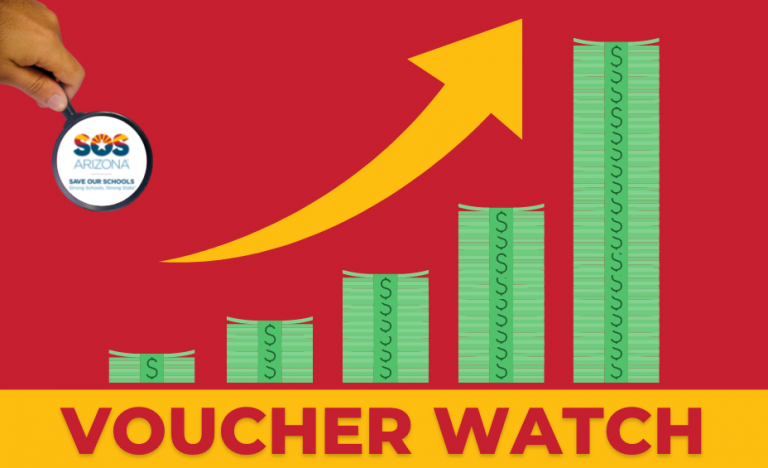 Supt. Horne said his administration approved 25,000 applications for ESA vouchers on his first day in office. This means $22 million in taxpayer funding was redirected to private pockets in a single 24-hour period. It’s unclear how that could be done while also properly vetting the applications and private institutions who received the voucher funding.

The JLBC reports 30,000 new universal ESA voucher students, representing an unbudgeted cost of $200 million. They also say the Arizona Department of Education cannot pay for this shortfall and will require a supplemental appropriation in 2023-24.

©2023 by Save Our Schools Arizona® All Rights Reserved. Not for use in whole or in part without permission.

Protect Public Education in Arizona!
Join the SOSAZ Team!
Be the first to get latest updates
straight to your email inbox!